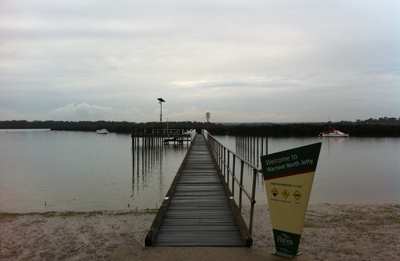 a jetty on a drizzly day

We’ve been working so hard lately, B and I, that we decided today to have a bit of a day off.
That was the plan, anyway. Our day off ended up starting at almost 4pm. We like finding places that we’ve never been before, which is kind of difficult even for me, and I’ve only lived here for 10 years, B has lived in this area almost his whole life.

But we did manage to accidentally find this little cluster of fishing villages, which are all arranged in coves of a large mangrove swamp that opens (eventually) into the sea. The houses aren’t great, I imagine mostly holiday homes and the odd local (possibly very odd…), but they’re really quiet. And not in the serial killer, strangers get eaten kind of way. Just gulls, and herons, and on a warmer day, pelicans probably.

The villages are too small to have a pub, which is essentially the stage where somewhere in Australia becomes a ‘town’. They just have little general stores that act as the local post office (not uncommon, I grew up in a village smaller than these, although apparently it’s much larger now. 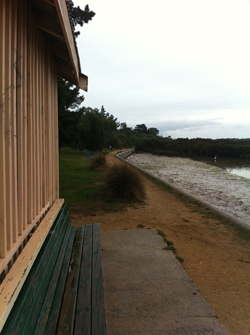 a weather shed by the water

I did find however that my iPhone sucks as a camera, it’s just … well, not a camera. I’m a bit of a camera snob, and I still haven’t totally come to terms with digital cameras, they’re just too… easy.

I was going to go to bed, but that particularily fucking annoying time of month is raising it’s ugly head, and I’m all crampy and cranky and just want to curl up around a couple of my heat pads. I can’t sleep when I’m in pain anyway.

I promise there’ll be more drawings soon, they just take longer than I thought they would!

2 thoughts on “A day trip to where the fuck is this?”

this fine selection of ... was brought to you by the letter m.