cats, more about my cat 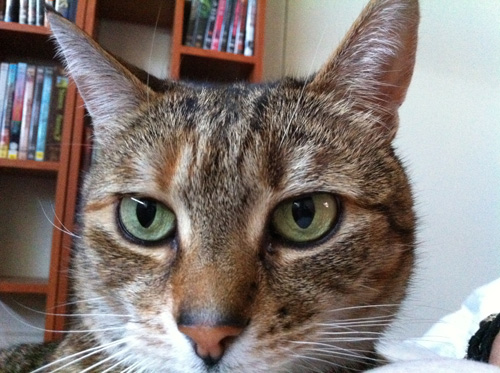 So, Hoody’s fun reminded me of just how much fun my mog can be. As long as you define fun really loosely.

Besides, I’m having a bad evening, so fuck you if you don’t want to read about my cat <blows raspberry>.

My cat is both seriously intelligent (or perhaps cunning), and the dumbest creature on the planet.

She can open sliding doors, wooden or aluminium (yes, we spell it funny), and the kind of doors with lever handles. Doors with levers, she jumps up and smacks the lever somehow, until it flicks down and the doors open. The wooden sliding doors she just bounces into, and each time, it opens a little more. The metal ones take longer.

First, she claws at the felt that’s supposed to insulate the join of the door until she has a grip, then she slips the first part of her paw in… and pushes her paw in.

Once her paw is in, she uses her arm to lever the door open a little until she can get her shoulder into it, then uses her strong-as-shit head to finish opening it.

How do I know this? Firstly, I didn’t, I used to assume I’d forgotten to close the back door when I left. Then once I didn’t realise I’d closed it while she was outside, and since I wasn’t moving, she didn’t realise I was sitting just inside (or didn’t care). She then opened the damn door while I’m sitting there in stunned silence.

Since then I’ve locked it when I’ve wanted it closed. Also, there’s none of that felt stuff left at the bottom of the sliding door.

On the seriously fucking dumb side is the things she eats.

Not just normally icky stuff that cats like, like arachnids and bugs, but dumb shit that noone but goats would eat.

Things like cotton wool buds. She chews the fuzzy ends of them off, and leaves the plastic stick around. Ribbon. Elastic.

The elastic I discovered when I heard this monumentally loud howling and went running to find her, thinking she was dying. No, she just, well, lets say, had an extra tail… so I had to catch a scared cat, with elastic (and other pleasant surprises) hanging out of her butt…

The ribbon luckily I caught as it spaghetti slurped into her mouth, and I pulled it (literally) out of her mouth and throat, otherwise that would have become an extra tail too.

Now I’m going to go watch Will & Grace until I go to sleep.

this fine selection of ... was brought to you by the letter m.